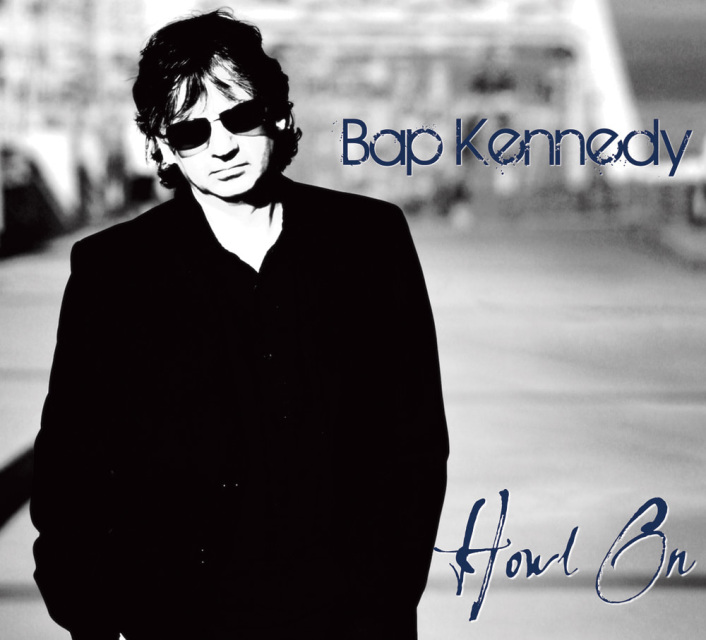 (All songs written by Bap Kennedy, except No 6)

Howl On is Bap's first album to be recorded in his native Northern Ireland in the studios of genius guitarist Pete O'Hanlon. Hey Joe (track 6) features on guitar the legendary Henry McCullough – the only Irishman to  play at Woodstock.

The opening song on the album, "America" reflects on Bap's childhood memories dreaming of all things American and when cowboys and the astronauts of the Apollo 11 spacecraft were his heroes.
"Cold War Country Blues" name checks more of Kennedy's boyhood heroes, Hank Williams, Elvis Presley, John F. Kennedy and Apollo 8 astronaut Jim Lovell.
The song "Brave Captain" is dedicated to the Apollo 8 crew; and on "The Heart of Universal Love" Bap imagines the earth as seen from the view of an astronaut standing on the moon and looking up at the illuminated planet in the darkness of space.
"The Right Stuff" is a song inspired by and dedicated to the Apollo  astronauts. (The Right Stuff would later be re-recorded for The Sailor's Revenge at the request of Mark Knopfler)
"The Ballad of Neil Armstrong" celebrates Apollo 11's mission commander Neil Armstrong and the song "Irish Moon" is Kennedy's ode to another of the three astronauts, Michael Collins, who piloted the spacecraft as the other two astronauts landed on the moon.
"The Blue One" is named for the Earth's image as seen on a photo taken by Voyager 1.

The Inspiration (Bap's own words)

I was a seven year old Belfast cowboy trying to stay awake in the early hours of July 20 1969 for the first footsteps on the moon. When I woke up they were on their way home. One month later it was already old news as Jimi Hendrix brought Woodstock to a close with Hey Joe - and the freaky decade so full of promise staggered into a troubled 1970 with a massive hangover.

Nearly 40 years later I began to write some songs that grew into the lunar voyages/1969 inspired album that has come to be known as ‘Howl On’. And all because of a book called Moon Dust, that I devoured by the light of a log fire DVD at the start of a strange lonesome year in London. The Apollo missions and the 60’s were suddenly fresh, wonderful, insane and large as life to me, a man now in his forties - slightly older than the crew of Apollo 11 when they landed on the Sea of Tranquility.

What had become of these men and what had they experienced? How could such a momentous event be reduced to an MTV logo? I was lonely and crazy for love and becoming obsessed by the whole saga. I watched every documentary I could find on the subject and inevitably there was Jimi somewhere in the soundtrack - a reminder of the far out counter culture backdrop of the space race and the Cold War.

And so it was that I immersed myself in the lives of the chosen few who went up there and didn’t care if they never came back. I was in love with America as a child and when I finally got to New York in 1989 as a professional musician I wasn’t disappointed. I’d forgotten all about cowboy suits and spacemen by then, enthralled by the 24 hour bars beside Port Authority.

Gradually America wore me down and I fell out of love with the best and worst of everything. But now maybe things are changing. As a new spirit began to filter over in early 2009 I recorded my own take on Hey Joe during the ‘Howl On’ sessions. Furthermore in a cosmic coincidence I managed to get the legendary Henry McCullough, the only Irishman who performed at Woodstock, to play guitar on my version of the Hendrix classic.

And so now I’m starting to feel that good times are ahead and inspiration is flowing again, not just in me but in the world. The feeling that anything is possible if we just put our minds to it.

We went to the moon didn’t we? All of us.

"Bap Kennedy at his best" - Maverick

"Warm and nostalgic, with an edge" - Mojo

"beautiful. Check it out." - Irish News

"A thing of rare beauty ... impossible not to fall in love with" - BBC’s Ralph Mclean

"An understated, unusual and thoughtful collection" - The Irish Times